Advice from Autodeskers at Afrotech 2019

Advice from Autodeskers at Afrotech 2019 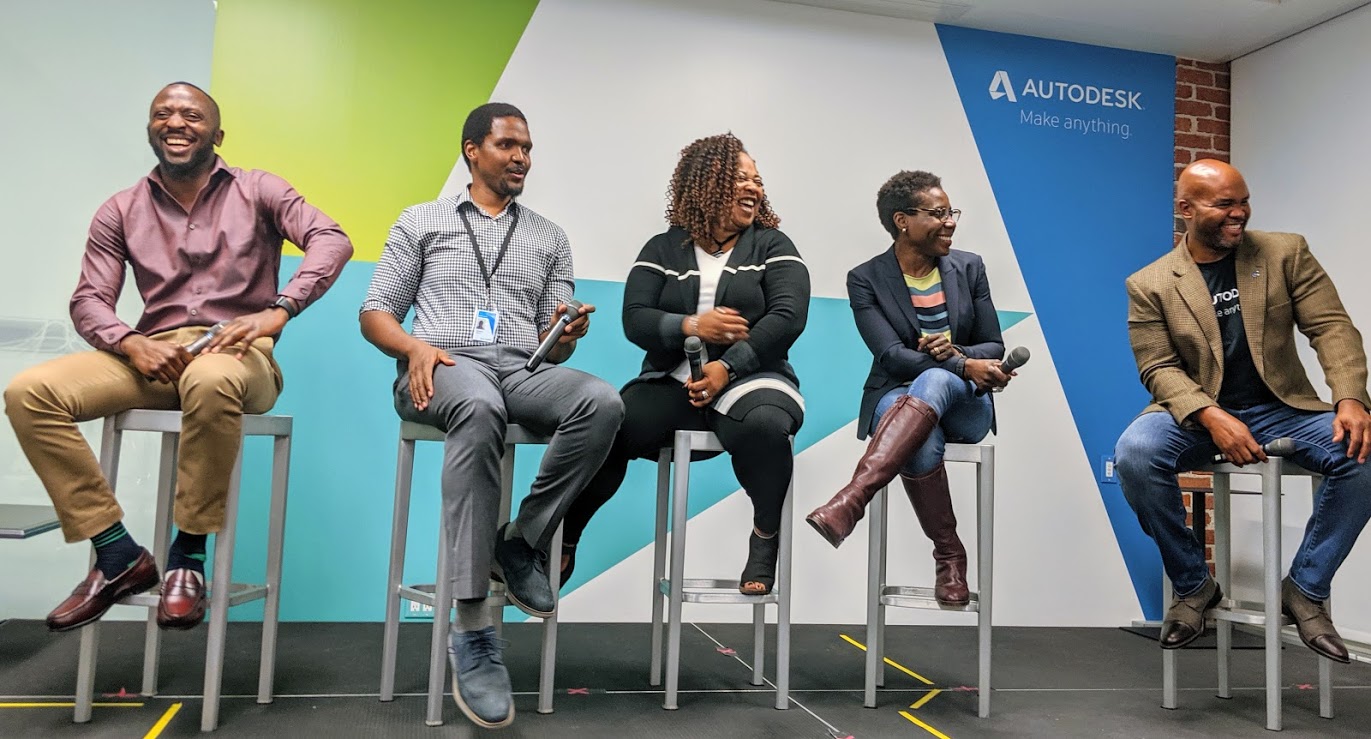 In November, tech enthusiasts showed up at the Autodesk Gallery in San Francisco to hear Autodesk employees share their experiences and advice around what it’s like to work in tech, and what it really means to be part of #AutodeskLife.

The occasion was a larger event happening in the Bay Area—AfroTech 2019. AfroTech is a culture immersion in the form of an annual conference that garners global participation across the Black diaspora. Held at Oakland Marriott’s Convention Center, the fourth year saw an estimated 10,000 attendees over the course of the three-day conference. A variety of keynote speakers, like John Zimmer (co-founder & President of Lyft) and Charlamagne Tha God (TV and media personality) were on hand to talk about Black representation in the tech community.

At the Autodesk Gallery, Ebot Ndip-Agbor, Erisa Ojimba, Sheryl Walton and Uchenna Okoye rounded out a four-person panel that was moderated by Autodesk Black Network (ABN) President, Omari Brandt. This was one in a series of AfroTech 2019 welcome events, and the first for Autodesk as a host.

Engaging, real and oftentimes infectiously humorous, the panel opened up to the audience and spoke candidly about topics ranging from their management philosophy, advice to new entrants in the workforce, to how one can elevate strengths while managing weaknesses in direct reports or members on their team.

One of the night’s themes was clear – none of us achieve success in isolation, but rather, “you’re only as good as your team,” Ebot advised. Sheryl echoed this by saying that building relationships is a must, and that “collaboration is key.” 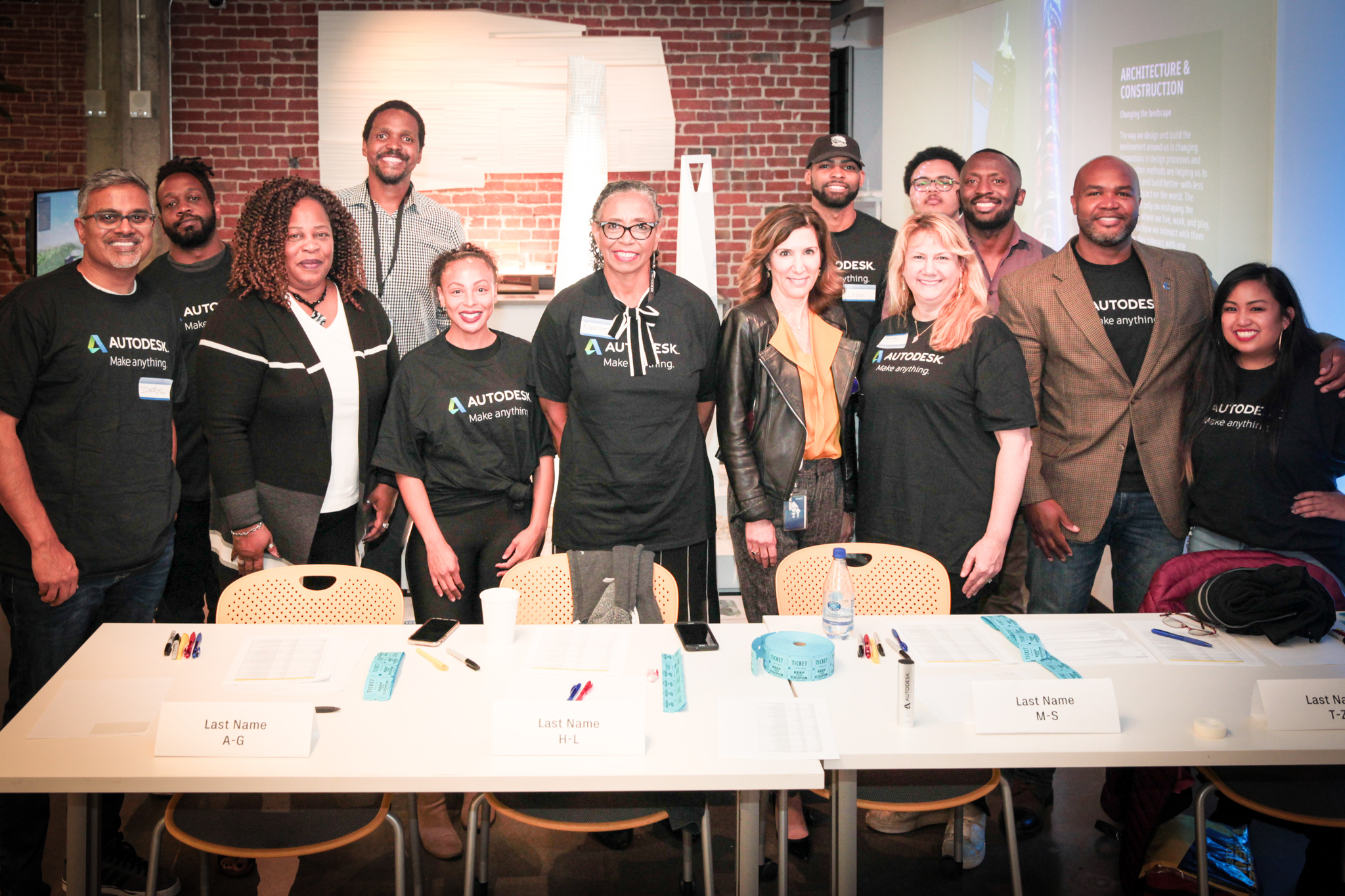 Autodesk CMO joined the event with members of the Autodesk Black Network (ABN).

Another lesson that emerged from the panel had to do with ambiguity in one’s career path—it’s okay to not to have a perfectly plotted-out plan for one’s career path. Uchenna encouraged the group by saying “your career meanders, and that’s okay.” Repeating this multiple times for full affect, he followed this up by saying that meandering one’s way through a career path “won’t always feel good, but it’s good.”

These were nuggets of wisdom this all-Black panel delivered to an audience of historically underrepresented groups in tech. Mostly Black and Brown, roughly half women, and a quarter or so recent grads, all were hungry to hear stories they could relate to, and that could motivate them personally and professionally.

Erisa responded to a question from the audience on how to land a job in a desired role. She cautioned that background in the function does not always equal success in that role, but rather doing “what you’re passionate about.” She continued to say that time and introspection are also enablers for success, as are being open and flexible in one’s career.

This was our first time participating in the Afrotech conference, and we designed the evening to achieve two objectives – expose Autodesk to the external Black community, and increase the number of Black engineers at Autodesk.  It was a cross-company collaboration between ABN, Autodesk’s Diversity and Belonging team, and Autodesk CMO Lisa Campbell, who kicked off the event with remarks that diversity, inclusion and belonging are of critical importance to Autodesk because they lead to “better results and a better atmosphere for our employees.”

The event left a profound impression on one attendee, who said, “This has been my favorite chat” out of the festivities that they had attended so far.  The surveys we collected at the end of the night reinforced the positive impact the event had on participants, with the overall satisfaction score being 9 out of 10.

We look forward to hosting again at AfroTech 2020!