“…it’s my great honor and pleasure to get rid of the podium – bring the ribbon down, bring the saw down, and we are going to cut some ribbon.” – Mayor Marty Walsh, City of Boston at the grand opening of the Autodesk BUILD Space (October 2016).

With those words, a ribbon appeared by the grace of two large robotic arms and cut by an industrial circular saw lowered by a five-ton bridge crane at the center of the Autodesk BUILD (Building, Innovation, Learning and Design) Space. With that bit of flash and pomp, a place was born fostering the exploration and experimentation for the built world to come.

1
With the passing of October, Autodesk celebrates the one year anniversary of the grand opening of the Autodesk BUILD Space.

When the BUILD Space opened its doors one year ago, three glass garage bay doors rolled high to welcome the greater Boston community in celebration.

The garage doors represent far more than an entry and exit for the large scale machines and projects which come and go from the BUILD Space; they offer Bostonians the opportunity to peer in to experience the future of making things – the future of work – in the built world as it unfolds in plain sight.

You see, the future of work is a ubiquitous tag line – many talk about it, write about it, or are in the midst of creating a corporate vision in anticipation of its arrival, yet many are innocent bystanders. Vision does not necessarily represent action.

75
More than seventy-five project research teams from academia, industry, and a select few of the most courageous architecture, engineering, and construction startup companies in the world – and we mean, the world – have experienced the unfettered collaboration in the BUILD Space.

Meet Seva Tsodokov, Founder and CEO of MetaComb Inc., who recognized a problem – a big problem. Before most world leaders have their eyes set on climate change and sustainability, Seva saw a problem and the possibility of a solution. 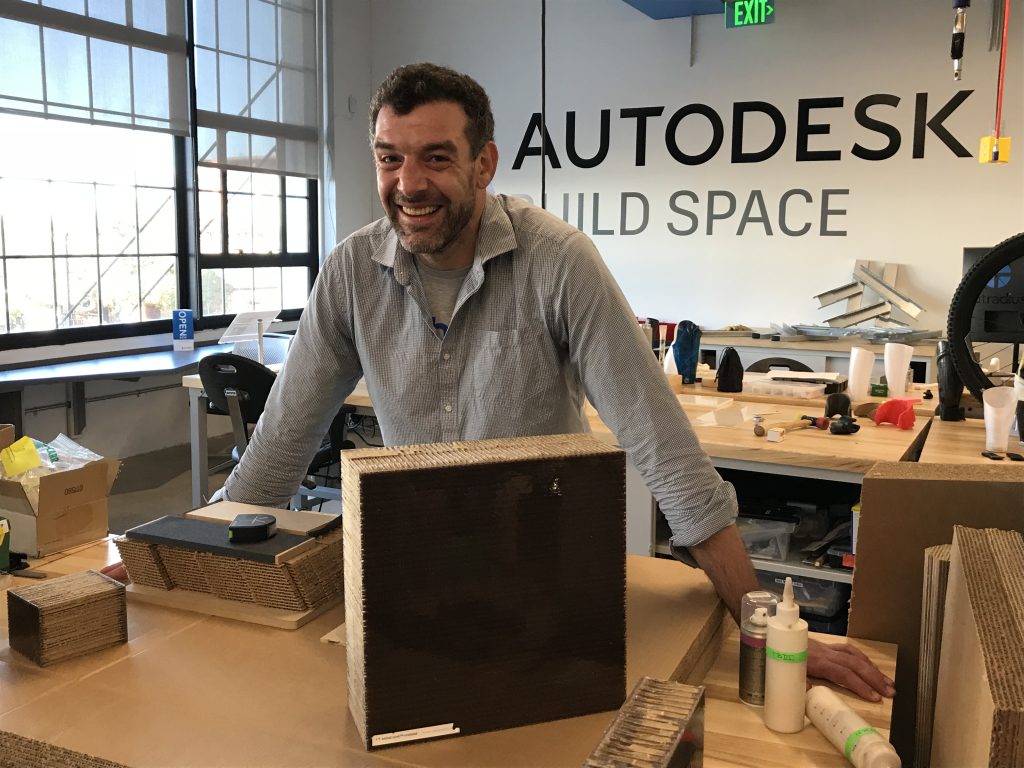 Littering construction sites are piles of timber, steel, and other waste. Seva took note of the unsustainable amount of waste in construction, but he also took special notice of the corrugated cardboard found outside places like Lowes, Home Depot, businesses and even our own homes, all destined to rot in landfills.

Seva began collecting, and working with the corrugated cardboard. That was the very beginning of the journey which lead to a patented technology developed in his Cambridge garage at the time. The new technology has lead the way to developing company’s core product –  lightweight honeycomb resin-based panels which could be used to build structures – building facades, walls for homes, and more. MetaComb material, the company’s product, is now being tested in a new construction project in the greater-Boston area.

The story of the BUILD Space reached the ears of the architecture firm Perkins+Will and sparked the interest of the firm’s Building Technology Lab. Over the last year, the firm has sent three investigative research teams to explore atypical building structures, assemblies, and fabrication processes at the BUILD Space.

In a one-week design sprint, two architects from Perkins+Will fabricated a diagrid structure for a conceptual 80-story high-rise made of timber, a research project known as River Beech Tower. The team turned its attention towards understanding how to construct a modular connection node prototype at 1:1 scale, moving from theoretical to practical to better understand the complexity and challenges of building this project. 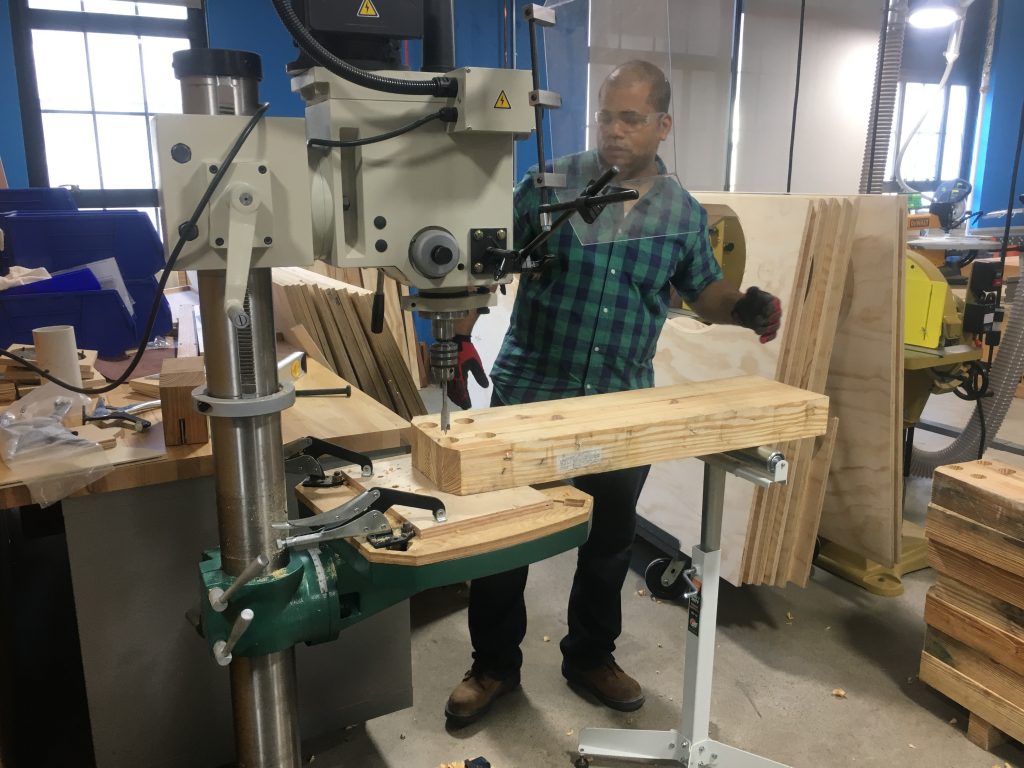 “Going from scale models to full scale was only possible with the advanced workshop tools provided by Autodesk BUILD Space, and the opportunity to experience this type of shop and use as many tools as possible offered us a much clearer understanding of problem solving in real time instead of resolving it on the computer screen,”  said James Giebelhausen of Perkins+Will.  “Within a 1-week time frame, we quickly were trained on the use of all tools and equipment that we determined were needed to build the prototype, and along with the Autodesk BUILD Team, additional equipment was implemented in order to expedite the process.” 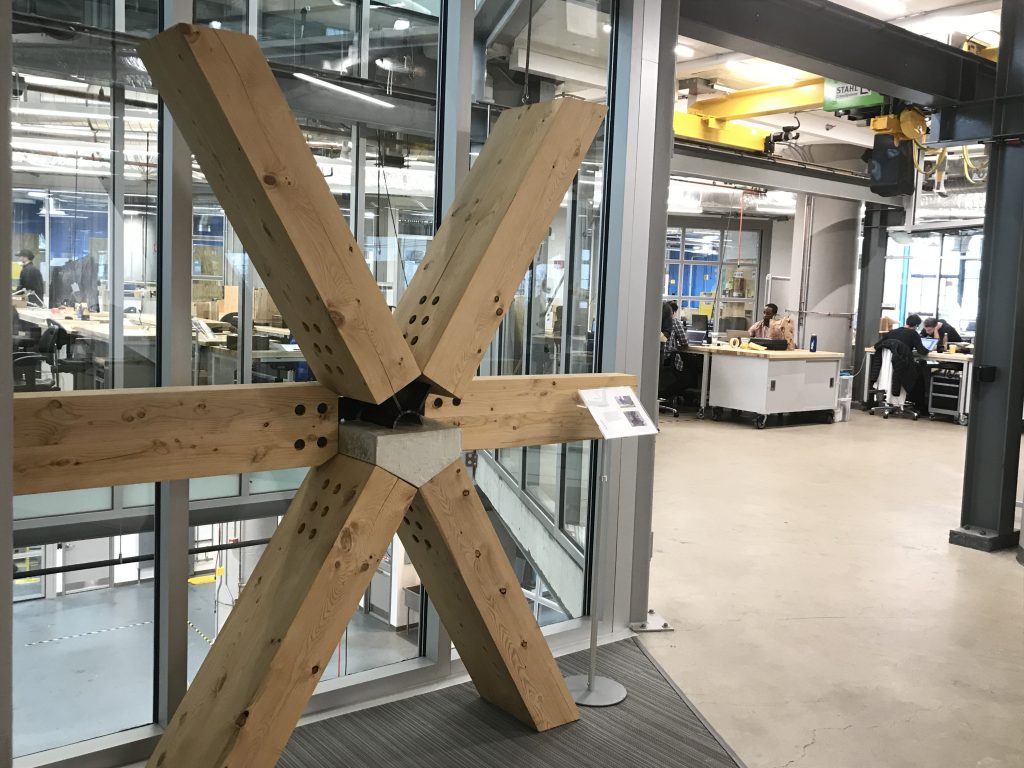 In one week, two architects from Perkins+Will fabricated a diagrid structure for a conceptual 80-story high-rise made of timber. The team constructed a modular connection node prototype at 1:1 scale.

500
The 75 teams are comprised of 500 individual thinkers, builders, creators, and visionaries. Three hundred of them have already passed through our doors and departed – leaving their mark on the future of making things and the future of work.

Today, 200 residents work in the BUILD Space on their own unique projects. As you walk through the BUILD Space, you witness something unique happening, something special: collaboration. In a world of privacy, protection of intellectual property, and competitiveness among ambitious entrepreneurs, teams are sharing information and helping one another.

It is exciting to see a team create a new method for robotically spinning carbon fiber for building structures, while collaborating across industries to help another startup improve its manufacturing process for the creation of a new type of prosthetic limb for amputees.

This is the spirit and mission of the Autodesk BUILD Space, and the culture of Boston’s startup community. We look forward to continued collaboration and creation in the years to come.

If you’ve got a big idea with the potential to transform the Architecture, Engineering, and Construction (AEC), send us your idea and we will get back to you.