After Testing in Toronto, Generative Design Shows High Potential for the AEC Industry

After Testing in Toronto, Generative Design Shows High Potential for the AEC Industry

What happens when you have access to software tools that are so powerful, you don’t even know all the ways to use them? That question was at the heart of a recent quest that Autodesk embarked on when we came together with customers and researchers this summer at our Technology Center in Toronto. Our objective? To explore the potential applications of generative design for the architecture, engineering, and construction (AEC) industry.

If you haven’t heard of it, generative design is a process that allows designers and engineers to explore, evaluate, and optimize design options based on their specific goals. By explicitly defining their goals and constraints, they can tap into the software’s algorithms to generate solutions that meet each of their criteria, freeing them from creating tedious manual iterations while also exploring a vast solution space that would not otherwise be possible.

Autodesk has been exploring the use of generative design for AEC applications over the past several years. We’ve even applied it in the construction of our Toronto office, where computational workflows and generative learning processes allowed the design team to automatically produce thousands of layout options based on the many requirements for the workspace – some of them conflicting. Ultimately, this led to a new beta version of our generative design tool for AEC. We call it Project Refinery.

Earlier this year, we began discussing the idea of inviting design teams from some of our current customers to test our new beta tool and see how it might help AEC professionals solve real-world problems in the field. Just six months later, we had five teams from three continents at our Toronto Technology Center. These groups who joined us represented a mix of both customers (like ARUP, Parsons and Hone Structures) and academic institutions (like the University of Toronto and MIT). Together, the cohort explored new ways to use generative design—like improving building performance and human experience, enhancing structural analysis for digital fabrication, and optimizing urban design and energy performance. 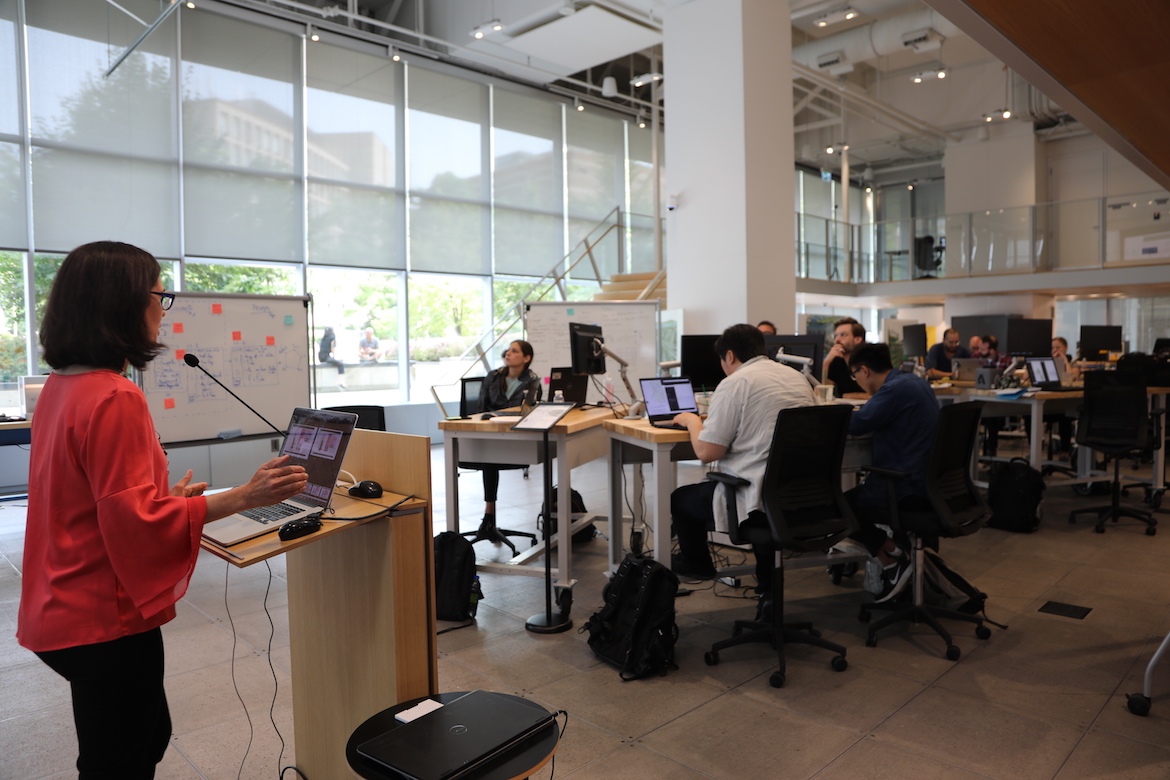 Refinery Product Manager Lilli Smith (left) gives an introductory talk to all the resident teams on the current state of the generative design technology and Autodesk tools like Project Refinery.

This residency illustrated how hungry the AEC industry is for new approaches to solving old problems. Many firms know that they’ll need to adjust their design processes in order to adopt generative design workflows in the near future. In fact, we’ve seen so much enthusiasm and interest in the residency that we’ve continued to receive inquiries from teams long after the residency’s conclusion.

The teams that did join us learned a great deal — not only about how Project Refinery works, but also how generative design thinking can change the way they solve (or even how they view) a variety of challenges. And our project and research teams gained incredibly valuable insights into how Project Refinery performs when designers put it to the test. 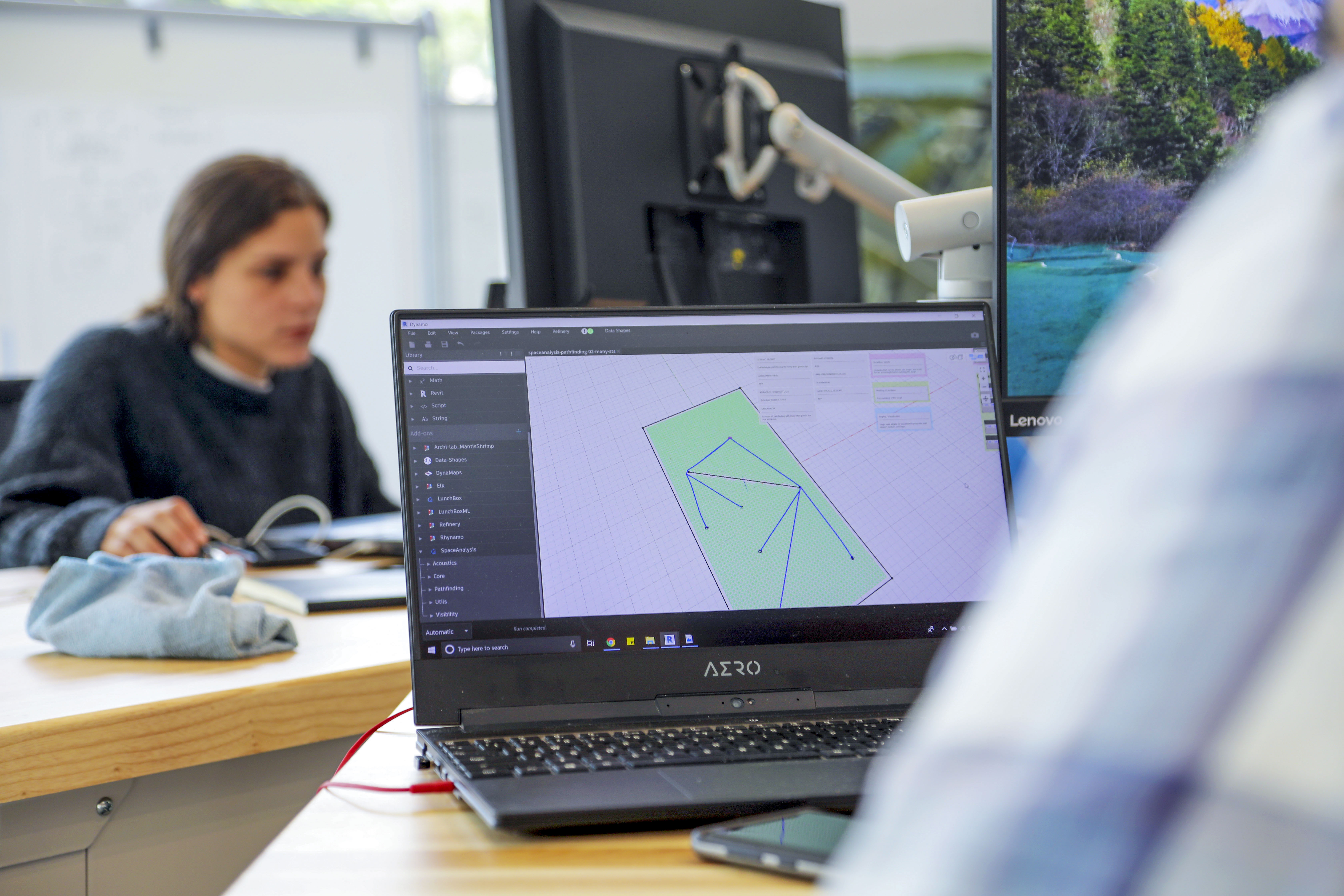 Theofano Antonakou (background) from Parsons Construction team is developing a similar series of parametric controls for her urban-design model.

The Finer Points of Project Refinery

Project Refinery gives designers the power to automatically generate a wide range of solutions for their specified design problems.

Much like any other design tool, Project Refinery can be used in many different ways, depending on a user’s goal. Some designers seek a single “Goldilocks” solution that provides the best balance between two or three competing variables (such as cost, land use, energy performance, building height, or user experience). Others want to present clients with a wide range of possible solutions that all meet the goals of a project. 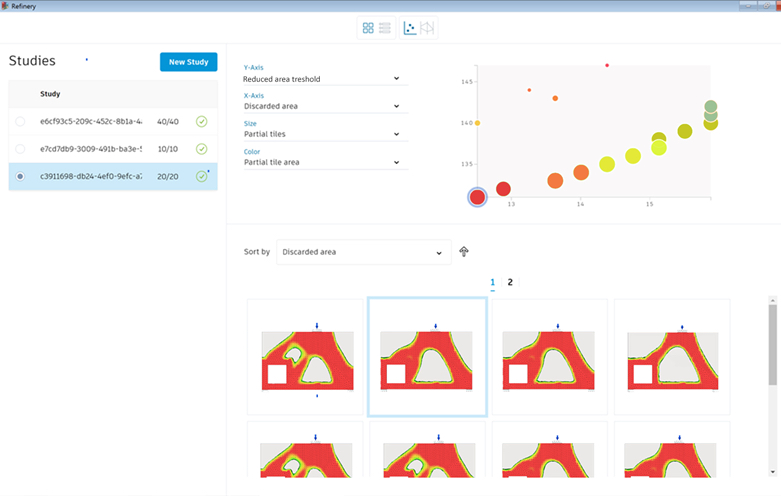 A study created in Refinery by the HONE Structures team. The performance metrics of each generated model are being automatically organized and visualized in the upper right-hand graph. Corresponding model previews of these generated models are displayed in the lower right-hand.

Testing Out the Technology

In an effort to “stress test” Project Refinery across a range of use cases, the different residency team designers tackled problems as granular as the performance of structural concrete and as broad as neighborhood developments.

One team looked at ways to optimize reinforced concrete for architectural application around variables including cost, weight, fabrication techniques, and structural performance. Another team explored ways to plan neighborhoods, design buildings, and even re-form landscape features in Southern Florida in response to sea level rise. They ended up using Project Refinery to not only generate a wide range of possible solutions, but to begin narrowing those solutions down to a smaller set of results that performed better than they originally anticipated.

One team wanted to add residential square footage to a neighborhood development plan that included a number of high-rise towers. Traditionally, designers solved this problem by simply increasing the number of floors to each of the towers, increasing their overall height. By using generative design, the team could prioritize their project goals and distribute the types of residential space in a more logical manner. Based on their input, Project Refinery was able to place smaller residential units near public transportation, and to place larger family units near schools, parks, and houses of worship. 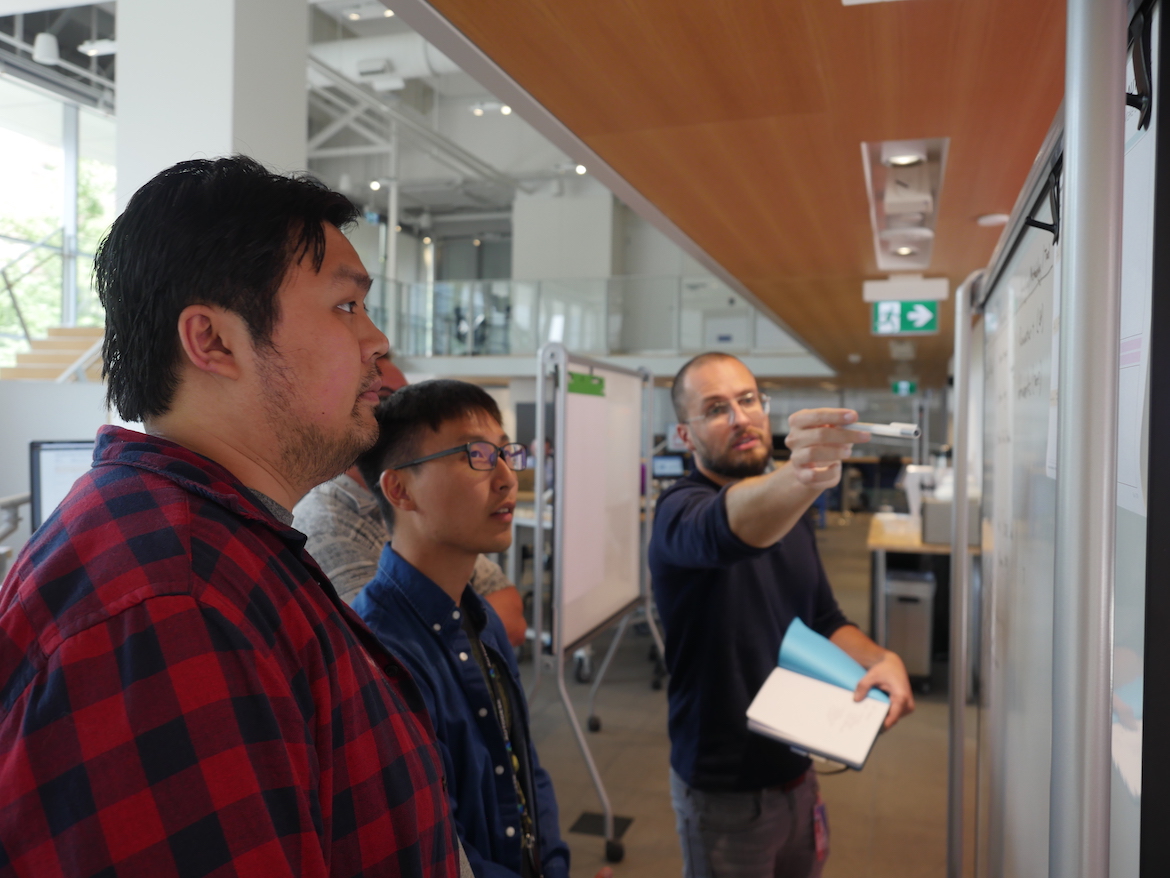 John Nguyen (left) and Isaac Shea (middle) from the University of Toronto’s “Flux Land” (Coastal Resilience) team brainstorm with Matthew Spremulli (right) on how to approach building their parametric model for topography and urban massing.

For us at Autodesk, it was eye opening to see how designers can up-end their own design paradigms as they embrace generative design thinking and processes. Watching how they used the tool, we gained valuable insight into the ways we can evolve Project Refinery as a stronger tool for AEC design problems. For the design teams, the residency allowed them to move beyond the buzz surrounding generative design and begin to see what it takes to put it into action.