Future of Making Series: What Lies Beneath the Sequential Roof

Future of Making Series: What Lies Beneath the Sequential Roof

Part 3 of a 5-week series from the new Future of Making book by Tom Wujek. Stories will be posted here on In The Fold and on Redshift. To learn more about the book, visit www.autodesk.com/future-of-making-book.

The world’s largest robotically constructed roof is an impressive feat—but not more so than the robotic architecture experiments that will happen under it.

When the Institute for Technology in Architecture (ITA) needed a new home at the engineering and science university ETH Zurich, the institute approached the challenge as it does most of the work done there: as a life-size research project. Here, the ITA could explore concepts including zero-emissions architecture, the digitization of the construction process, robotic construction, and the creation of a building free of central supporting structures. It would be research done at a scale of 1:1. 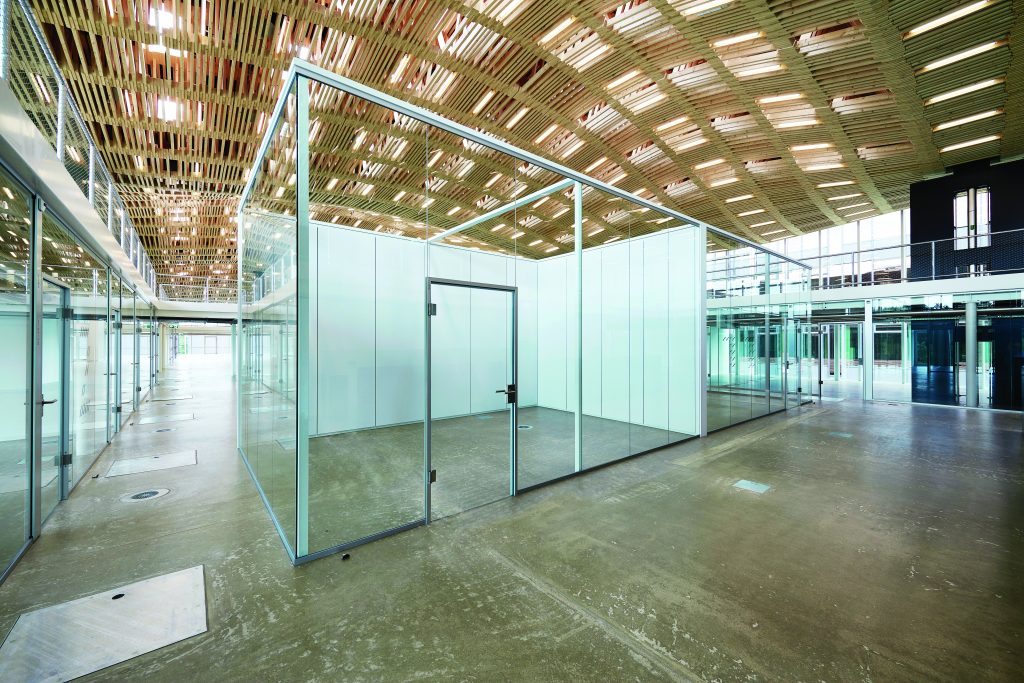 The remarkable, curved timber roof of the ETH Zurich’s Arch_Tec_Lab.

The result is the Arch_Tec_Lab, which opened in September 2016. The new building is an impressive feat
of architecture and a real-life application of ITA research. Beneath the zero-emission structure’s curved wood roof is a workspace—the Robotic Fabrication Laboratory, big enough for four industrial robots to build a two-story building, where the ITA’s groundbreaking research continues.

The roof itself is the biggest proof point: It was designed computationally and built by robots, signaling a new generation of construction and a new world of man-machine interaction. The Sequential Roof, as the undulating structure is known, was built by robots working “essentially like a massive 3D printer. It’s layer on layer on layer of timber,” says Russell Loveridge, the managing director of research at Switzerland’s National Centre of Competence in Research (NCCR) Digital Fabrication, a research group housed at ETH Zurich that now resides in the new building. The nationally funded research program is a rigorous multidisciplinary investigation into advanced fabrication, smart materials, and experimental construction techniques.

Also under the new roof, and embedded in the framework of the NCCR, is the research program of professors Fabio Gramazio and Matthias Kohler, NCCR principal investigators. Their research into robotic fabrication helped lead to this innovative roof; their program’s past projects (see page 184) indicate the kind of work that the new building’s Robotic Fabrication Laboratory will host.

Left: This 2015 project, Smart Dynamic Casting, investigated robotic fabrication of complex concrete structures and particularly the need (or lack) for individual frameworks for the structure. Right: For a 2011 project, The Endless Wall, a robot had to z its own position, its surroundings, and the tolerances of the bricks at Hand. The system had to respond to changing conditions as it built and rebuilt the “endless wall.”

The Sequential Roof is the largest robotically built timber structure in existence. It is essentially a massive timber structure covered in a rubberized polymer membrane, which eliminated the need for interior finishing—there are no drywall or acoustic panels in sight. Rather than a building-wide HVAC system, small heating and cooling units are distributed throughout the building with sensors to fine-tune the climate control. Spaces were left in the roof trusses for installing lights, skylights, ventilation, and wiring, and the roof itself is an acoustical diffuser, creating a quiet space underneath the roof for people to work.

“The choice of materials and the amount of materials you use is by far the biggest input in the ecological costs of construction,” Loveridge says. “If we can design something like the roof to serve all these functions and eliminate those other materials, we know that we’re building more sustainably than if we do it more cheaply.”

The zero-emission build started from the ground up: The structure was constructed on top of an existing parking garage, avoiding the energy and environmental effects of a new foundation. The first level of the building houses the Robotic Fabrication Library, which Loveridge describes as an engineering testing hall. Above the testing hall are the offices for NCCR, and above that is an open space under the roof where researchers can work and collaborate.

The testing hall is where the roof was fabricated. During the build, four industrial robots hung from the ceiling of a 60 x 14 x 8 meter space. The robots worked on gantries with six degrees of freedom, all controlled by the same system so they could work in sync. “There’s never been a case where four synchronous robots can do things together,” Loveridge says. Each robot was capable of holding up to 30 kilograms (66 pounds), so one could hold an object while the other three worked on it with various tools. 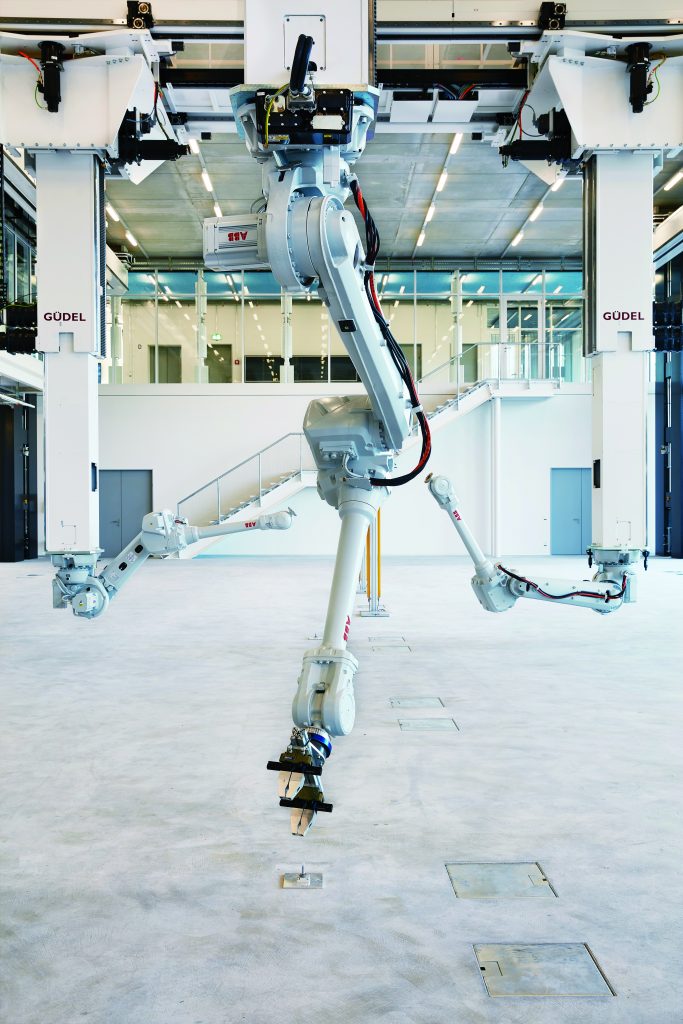 The Sequential Roof is made up of 48,624 individual timber slats, assembled into 168 roof trusses and truss girders that are interwoven into a 2,308-square-meter (24,843-square-foot) free-form roof. Fabricating the complex roof geometry was dependent on an integrated digital planning process that mixed together elements of structural analysis, design, and fabrication data generation.

Architects at the institute built a 3D model of the Sequential Roof, which they sent to structural engineering consultants who used a nail image generator to place each of the 800,000 nails necessary in the model. (Nails were a better choice than glue for the roof, but also involved intense calculations related to the material and the complex geometry of the roof.) Then ERNE checked the data and prepped it for robotic machining.

During production, the gantry robot also functioned as a quality analyst. A photogrammetric system compared each node and nail image with the target plan, creating a QA feedback loop that ensured everything was being built correctly. After the system checked all the nails, the trusses were brought to the site.

Despite the success of this project, Loveridge doesn’t believe that robots will ever entirely replace construction workers. Instead, the backbreaking work of construction will evolve into a job that has a symbiotic relationship with the machines, and it will no longer be a young man’s realm. Computational analysis has improved in the past decade to give machines enhanced spatial awareness and precision. But you still need someone to make sure the computers are making the right decisions and completing tasks in the correct order. Even now, you see workers becoming more intellectually engaged in construction and less physically engaged, and that will accelerate with the rise of robotic fabrication.

“A lot of the jobs being done in the construction industry rely on the human’s ability to look, process, and judge things, and rely on experience, and then do the physical work in reaction to that,” Loveridge adds. “There’s an inherent tacit knowledge that comes from working on a construction site that is not programmable. The way things come together is never perfect, no matter how much you do. There’s always going to be a need to have people who know how things go together.”