Part 3 of a 5-week series from the new Future of Making book by Tom Wujek. Stories will be posted here on In The Fold and on Redshift. To learn more about the book, visit www.autodesk.com/future-of-making-book.

New fabrication methods mean that buildings can be made faster and more efficiently—breathing new life into ideas about design and construction.

Architects, designers, and developers have long struggled to streamline the complex process of building. Now, advances in digital and industrial technology are enabling several companies to integrate best practices in fabrication and assembly to create more efficient and sustainable production methods and more durable and attractive buildings. This is taking place on vastly different scales, from skyscrapers to office buildings to homes in rural England, Scotland, and Canada.

London design firm Facit Homes uses digital tools and modern manufacturing techniques to fabricate building components—many of them on-site in a portable facility housed in a shipping container. The pieces are then assembled on-site. 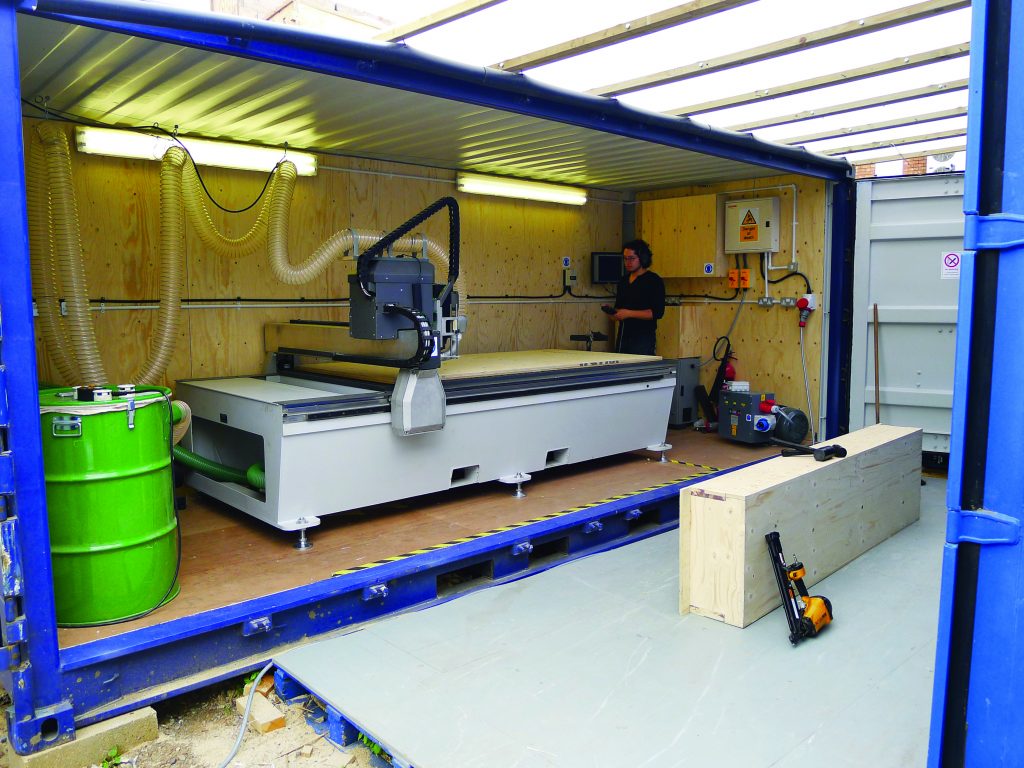 The D-process, as it is called, begins in the firm’s East London studio. Just as with many architects, designers using building information modeling (BIM) software create a 3D digital model of the home according to the customer’s budget, site specifications, and design preferences. At Facit, though, the homes are made not from 2x4s and other standard parts, but from a system of precisely designed components that the firm itself makes using the latest fabrication tools.

Construction gets underway after a shipping container with a CNC router—a computer-controlled cutting machine—arrives at the site. The design is downloaded to the router, and the machine mills raw wood panels into modular building blocks for the frame, roof, and other components. (Metal stairs and some other complex pieces are manufactured at Facit and brought to the site.) The router etches a part number into each modular block to guide builders as they assemble the pieces, Lego-like, using large rubber mallets to connect the joints and nail modules into place. In a final step, windows and kitchen and bathroom fixtures are added. Everything fits snugly into place because the router has accurately carved out the right locations for sockets, ducts, light switches, and electric cables.

D-Process resembles the assembly line of a contemporary manufacturing facility in which everything is derived from a single digital model. Like an iPhone, BMW, or jetliner, each Facit home is bolted together in a highly controlled, fluid system. “We believe in manufacturing, and so does the customer because they want the reassurance that every part will be perfect,” says Bruce Bell, who cofounded Facit Homes in 2009 and is an industrial designer by training. “That is what contemporary manufacturing does; we applied that to building homes.”

The past century has seen many versions of prefab buildings—from the Sears Roebuck and Co. “kit houses” sold between 1908 and 1940, to architect Moshe Safdie’s stacked box Habitat ’67 at the Montreal World Exposition to the wave of prefab modern homes that Dwell magazine and others helped publicize in the early 21st century. These designs prompted public discourse but did not spark a prefab construction boom. By 2008, when the Museum of Modern Art in New York City staged the exhibition “Home Delivery: Fabricating the Modern Dwelling,” curator Barry Bergdoll wrote, “The relationship between the drawing board and the finished product has never been more dynamic, but the potential of prefabrication has not yet come to full fruition.” Today, companies like Facit reflect growing interest in new types of prefabricated structures that incorporate cutting-edge technologies and more daring and customizable design. 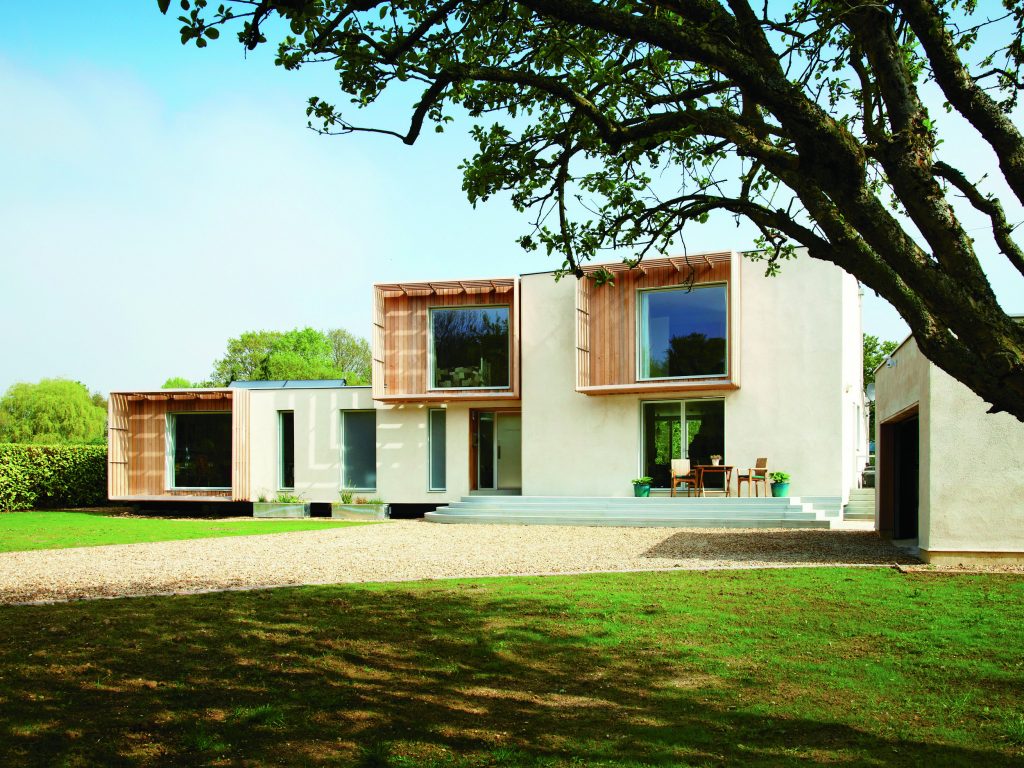 Bell says that efforts to devise an “ultimate building system” using prefabricated or modular units ultimately fail because such designs need to be standardized so they are cost effective. Inevitably, this leads to “boxy, dull, and routine” designs that disappoint customers who want homes with unique features. He considers Facit’s D-Process the next stage in the evolution of prefabrication because it is a “digital form of craftsmanship” that combines technology, customization, and traditional building skills. “There’s no human interference between the design and the object as it moves from computer model to a physical thing,” he explains. “But then tradesmen take over to finish the installation.”

At every Facit construction site, electricians, plumbers, and plasterers work with the company’s project management staff to oversee construction. Sometimes even the homeowner pitches in as special features like a laser-cut circular staircase, solar window shade, or front door canopy are lifted into place. But for the most part, Facit does all the fabrication and construction work.

Facit has built 15 homes, ranging in size from around 1,000 square feet to 5,300 square feet, in rural areas and suburbs in Britain and Denmark. Bell says a big attraction is the homes’ sustainable features: FSC-certified wood, 100 percent recycled fiber insulation that fills the modular boxes, and built-in mechanical heat-recovery ventilation. And because everything is fabricated on site, there’s less waste and lower labor and shipping costs. Yet Facit homes are not a solution for affordable housing: Depending on the configuration and features, the homes cost between $325,000 and $2 million, well above the average $260,000 price of a home in the U.K.

That could change if digital design, fabrication, and assembly methods are more widely adopted across the architecture and construction industries, creating economies of scale. Eventually, Bell says, “What we do will become less uncommon, but only if designers and manufacturing experts work together.”

The idea of bringing cutting-edge manufacturing techniques to customized construction methods has captured the imagination of other companies, too, including ConXtech in Pleasanton, California, and BONE Structure in Montreal.

ConXtech, a construction technology company, developed a unique digital design and fabrication process for the small connectors that support a structural steel framing system. The ConX system was conceived around simple, configurable parts that make it easier to assemble the beams and columns that hold up multistory buildings. This allows the company’s integration team, architects, and engineers to collaborate at a very early stage of the design process; using BIM, they can create a dimensionally and spatially accurate building framework.

Introducing innovation into established industries like construction engineering can be a challenge. For ConXtech, that meant establishing its own 122,000-square-foot factory in 2003 in Hayward, California, and equipping it with specialized CNC mills to manufacture the connectors, and robots that weld its lower-and-locking mechanism to standard steel beams. Once the materials are on-site, the structure can be put together safely and rapidly, “like an Erector set,” says Bob Simmons, ConXtech’s cofounder and CEO.

The company also needed to set up a full-scale testing facility in 2008 to prove that its connection technology could withstand seismic events and other stresses. At the time, Simmons recalls, “there was no clear path to accepting our technology because the building code changes so slowly.” In 2010, after extensive testing, a chapter was added to the American Institute of Steel Construction (AISC) codebook based on ConXtech’s testing results.

In a similar way, BONE Structure has disrupted the design and construction industry with new processes and materials for making homes and commercial buildings. “We really wanted to change the habitation throughout the world,” says the company’s founder and CEO, Marc Bovet.

Bovet started BONE Structure in 2005 after trying to build his own home, concluding that the way we build today is chaotic and fundamentally broken. “I think the caveman figured it out much better,” he said. “Since then we’ve been literally going backwards.” Bovet, who previously worked in the aerospace and transportation industry, put together a team to consider three critical issues facing the industry: the shortage of specialized labor, including carpenters; endangered supplies of its main natural resource, wood; and the need for greater environmental responsibility, as 60 percent of construction waste now ends up in landfills.

BONE Structure’s first home was made of wood, but the pieces were precut by a CNC machine and assembled on-site according to plans that Bovet says were “as precise as an IKEA furniture set.” However, this carefully crafted construction strategy was foiled by humidity that caused the wood to expand. So laser-cut galvanized steel—a much more inert material—became the standard for BONE Structure. Not only can steel withstand harsh Canadian weather conditions and seismic shocks (the company is also building in California), but it also resists mold and deterioration. Moreover, a steel-framed structure—which Bovet likens to an airplane fuselage—does not require load-bearing walls, allowing spacious interiors. 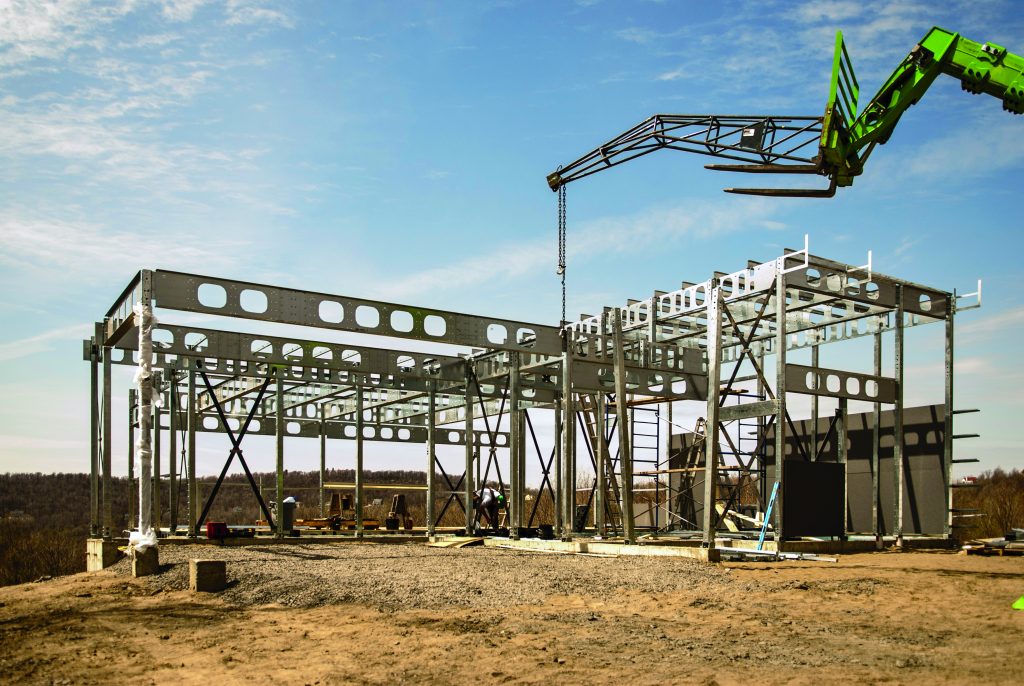 A BONE Structure home being as­sembled on site.

For the building process, Bovet insisted on an “idiotproof” construction system based on collaboration, seamless technology, and easy-to-assemble, precision-engineered parts. All team members—architects, engineers, designers, and contractors—are involved from the beginning to avoid any miscommunication and misinterpretation of construction plans and design intent. “I want them to grasp what’s at stake here,” Bovet explains, “to get a sense of the real responsibility that what they are creating will be here for 150 or 200 years.” Each building is custom designed on Revit and Inventor according to the owner’s specifications and run through a series of tests, including an energy-use analysis. 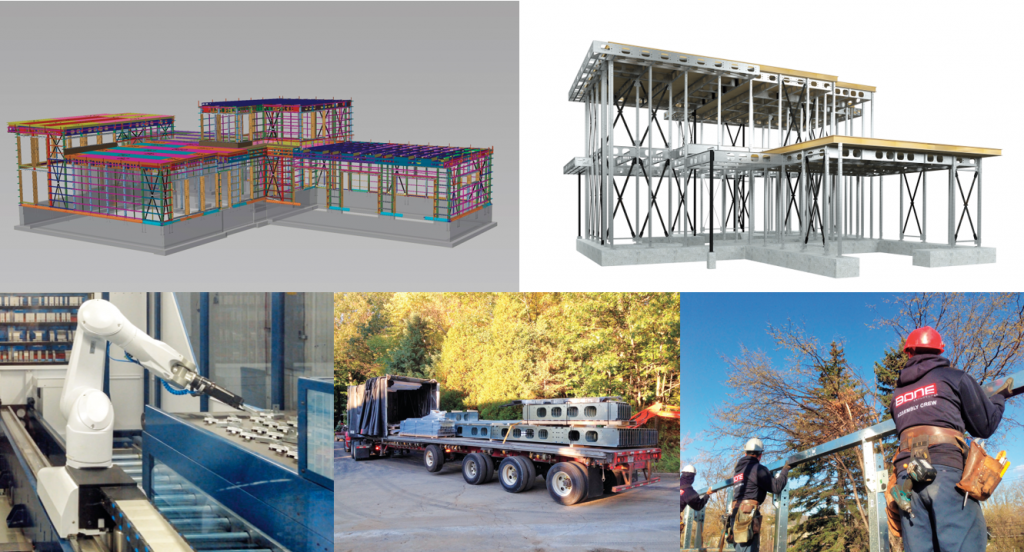 The design is sent to one of BONE Structure’s 15 manufacturing plants, where 11-gauge steel beams are cut to size with preset openings for electricity, ventilation, and heating components. The beams are shipped to the site on flatbed trucks with little or no packaging (to reduce waste) and assembled by builders using only battery-powered drills. Every piece of the building clicks together, Bovet says, using Lego blocks as an analogy—85 percent of the parts for every BONE Structure building are identical. Once the steel shell is in place, polystyrene panels and foam insulation are attached for a tight, energy-efficient building envelope that can be designed to meet LEED, Passive House, or Net Zero Energy specifications.

The innovations of all of these new building systems—integrating digital design and manufacturing, durable materials, and environmental benefits— will reshape the industry.