How We Used Drones to Digitize the Biggest U.S. Battleship Ever Made

How We Used Drones to Digitize the Biggest U.S. Battleship Ever Made

“The World’s Greatest Battleship.” “Battleship of Presidents.” “The Big Stick.”

There are many nicknames for the USS Iowa (BB-61), which was built in 1940 and saw action for four decades in World War II, the Korean Conflict, and the Cold War. She’s been through a lot and now rests in the Port of Los Angeles at an impressive 45,000 tons and 887 feet – almost three football fields in length. 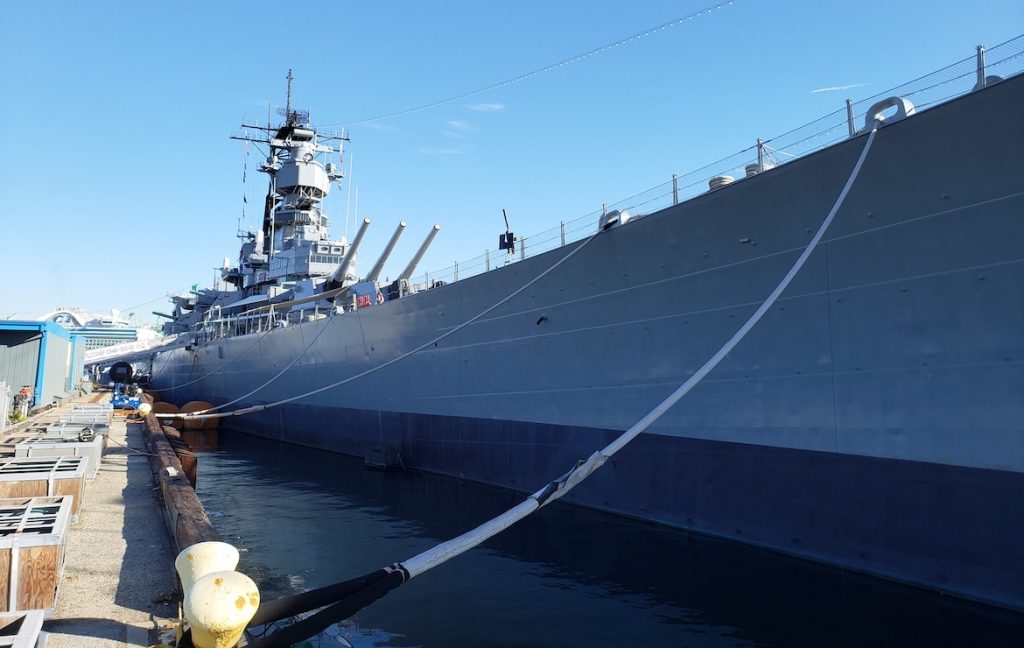 The USS Iowa at the Port of Los Angeles. Photo by Gregg Lagnese, Autodesk.

The USS Iowa is a piece of American history. The USS Iowa Museum hosts tourists, students, and history buffs alike – all seeking to experience history firsthand. However, there are still many parts of the ship that are inaccessible or unsafe to explore.

Recently, Autodesk took on the task of digitally scanning the USS Iowa to capture and reverse engineer this complex, hazardous, and extremely large mechanical system. It was a messy and dangerous job. So why did we do it?

Having a digital representation of the ship can serve many purposes, including helping others understand the safety impact to people and the environment, training for maintenance, preservation of legacy systems and historic equipment, educational material, and much more.

To make this happen, Autodesk partnered with one of our Master Government Resellers, Carahsoft. The scanning itself was done with the help of Carahsoft, HTS Advanced Solutions, and Sierra SkyWorks, Inc. For the virtual and augmented reality work, our team used the NVIDIA Holodeck and Unreal VR engine.

The scans and photogrammetry capture were done using a wide range of equipment, ranging from Ferrari-priced drones to commercial 360 video and small action cameras. 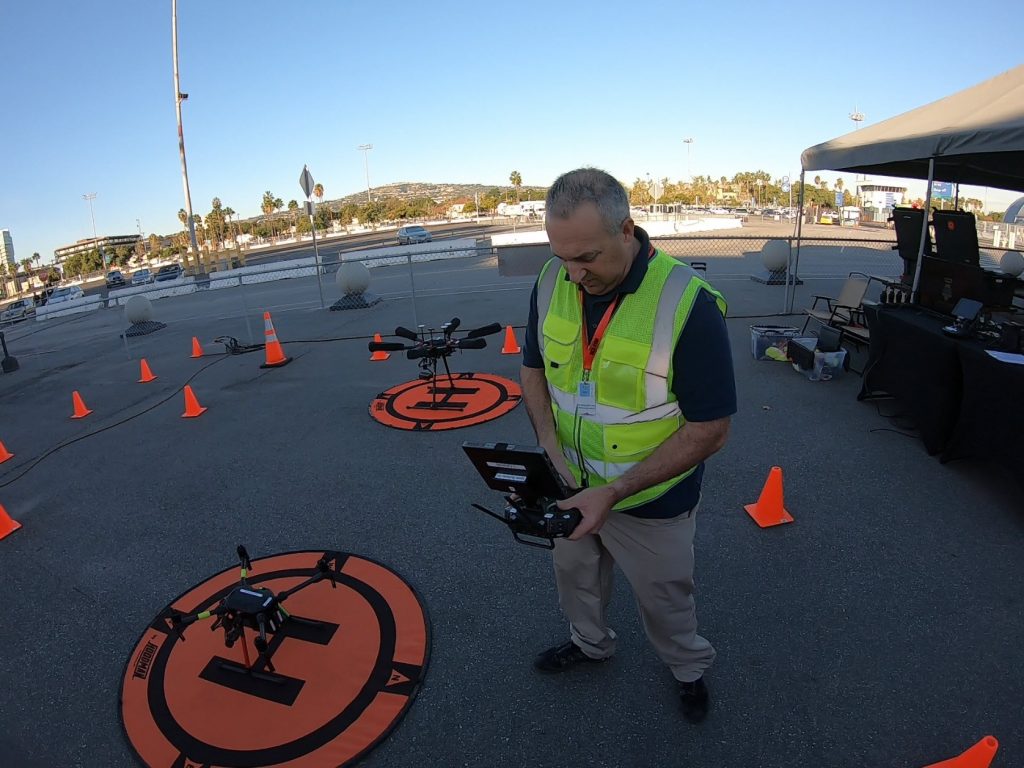 It was an honor to capture such an impressive piece of history, but it wasn’t all smooth sailing. The sheer size and scope of the vessel was our first challenge.

The USS Iowa is so large, it creates its own magnetic field, which interfered with the drones’ navigation systems.

The USS Iowa is so large, it creates its own magnetic field, which interfered with the drones’ navigation systems. For that, we ended up using a decidedly low-tech solution: we had multiple lookouts stationed around the ship to guide the drone pilots during the capture.

Once inside, we had to protect ourselves and our equipment from hazardous industrial chemicals called PCBs, or polychlorinated biphenyls. The ship’s crew has strict procedures in place to prevent the spread of PCBs, which are sticky and slippery. When combined with metal ladders running 50 feet or longer, it presents a significant safety challenge. In some cases, our team had to use repelling gear to get the data we needed. Some of the areas are wide open with 15 to 20-foot drops that could result in extreme injury or death. Other areas were so small that it was almost impossible to squeeze into them. 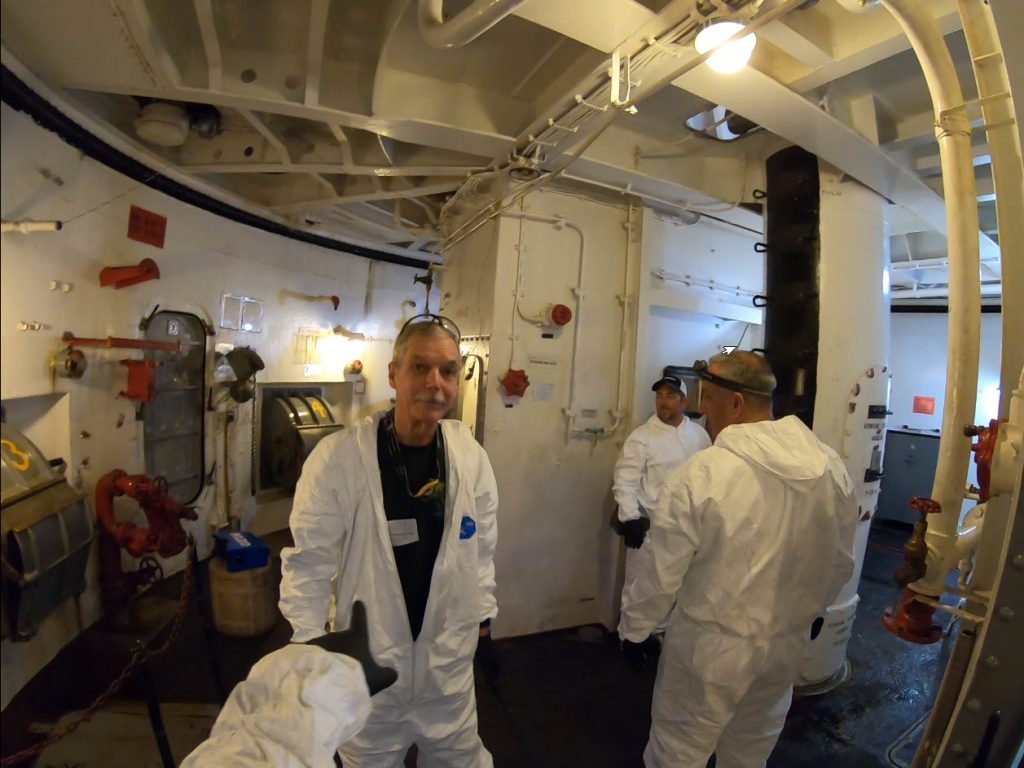 One of the USS Iowa crew members working with Autodesk’s Gregg Lagnese (the hand), Sierra SkyWorks’ Doug Wiedman and HTS Advanced Solutions’ Russell White in the 5th deck powder hoist room of the #1 turret. A single cylindrical powder bag can be seen to the left of the crewman’s elbow.

The biggest challenge though was taking the massive and diverse data set and bringing it together to create a complete inside and outside model. Using at least three different manufacturers’ capture equipment and various file formats, we also had to find a way to keep everything linked together with common visible components from one scan to another over the entire vessel.

Autodesk ReCap Pro image of the registered scans from the unmanned aircraft systems and FARO scanners.

In the end, the team had great success in pulling the disparate data together into a single, cohesive model. We’re now in the process of modeling these systems using engineering tools and entertainment software to create numerous engineering and educational examples.

In the video below, you can see Autodesk’s Dave Tyner exploring the USS Iowa in virtual reality using NVIDIA’s powerful Holodeck VR platform. Our Autodesk team prepared the model with 3ds Max and then sent the models directly to NVIDIA Holodeck where VR participants can visit and explore every inch of the USS Iowa in Virtual Reality.

It was a challenging and rewarding experience being a part of the team that captured and documented this impressive battleship, and I hope many students and historians can use our USS Iowa “digital twin” and data for years to come.