Don’t stop dancing to the rhythm within, even if you can’t hear the music

Don’t stop dancing to the rhythm within, even if you can’t hear the music

This is Shehzeen. She’s a terrific dancer, but you’d never guess that she’s hearing impaired. She’s got a sleek watch snugly embracing her left wrist to help her experience the rhythm of music through its vibrations, known as the Blee Watch.

Most of us can’t imagine a world without music. Dancing without music – that’s just unthinkable. But what’s to stop the world’s hearing impaired population of over 360 million from getting groovy?

Janhavi Joshi’s journey with the BleeWatch started three years ago while studying product design at MIT Pune. She was watching hearing impaired perform and noticed the instructor giving them distracting visual cues. As a Kathak dancer from a young age, Janhavi realized deaf dancers loved to dance just as much as hearing people do, and she wanted to give them the confidence to perform independently on stage.

After working with co-founder Nupura Kirloshar on other performing arts-related projects in their college years, the two decided to join forces on Project “Blee” and eventually founded BleeTech Innovations. The Blee Watch is now the first “Made in India” wearable for the hearing impaired. 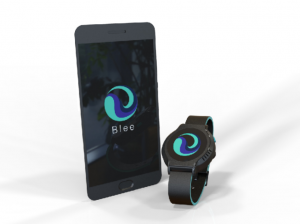 Designed in Autodesk Fusion 360, the founders of BleeTech Innovations are making a difference in the lives of the hearing impaired with their wearables (Courtesy of BleeTech)

Here’s how the Blee Watch works: Every sound is converted into a vibration pattern, so when music plays, users can express themselves through dance on the basis of these vibration patterns.

Users can also record emergency sounds like a doorbell, the fire alarm, or a baby’s cry into the connected app. Whenever that sound is played, the BleeWatch notifies the user with unique vibration patterns, colors and icons.

Today, over 1,500 attendees at Autodesk University India in Bengaluru will see the Blee Watch in action as a dance troupe from the Red Cross School for the Deaf takes the stage to open the event. Show them your support and follow updates from AU India on the Autodesk India Facebook page!