“The Eagle has landed.”

Astronaut Neil Armstrong used this phrase to declare that humankind had landed on the moon, fifty years ago at 4:18 p.m. on July 20, 1969. He followed with the equally historic words, “That’s one small step for a man, one giant leap for mankind.”

This July, the Smithsonian Institution is hosting several events to mark the historic 50th anniversary of the Apollo 11 lunar landing. In celebration, festivities will take place on the National Mall in Washington DC, including an event on July 18th with Tested’s Adam Savage. He will be performing a live build of the full-size replica of the Apollo 11 command (CM-107) module’s hatch at the National Air and Space Museum. 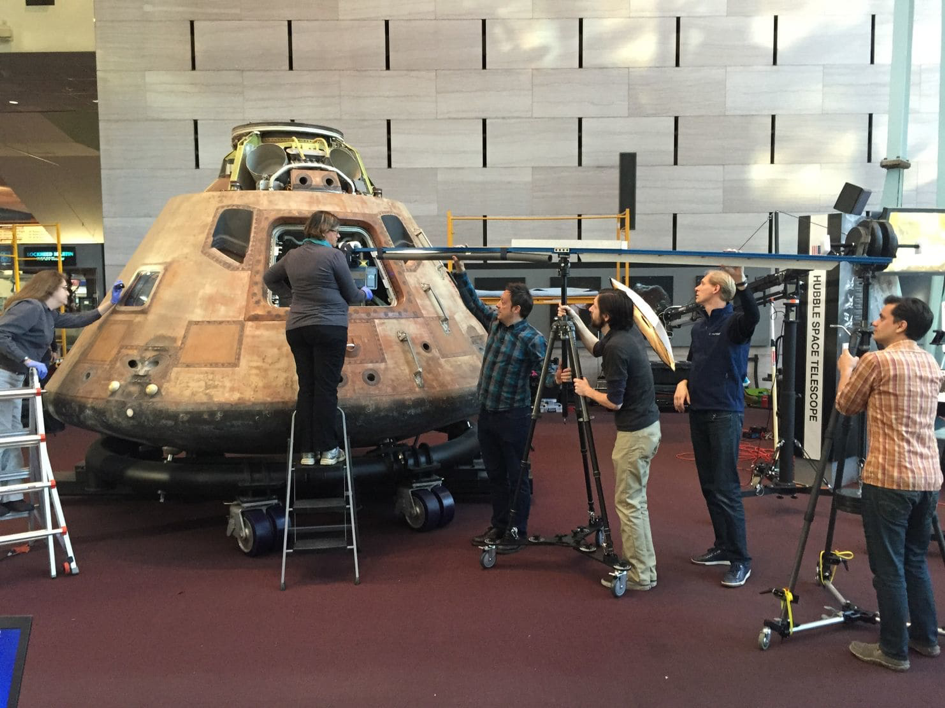 Autodesk was excited to have the chance to be involved with the re-build. Employees Jonathan Odom and Joe Jastreboski are working on the fabrication of the ‘plunger’ part of the hatch at Autodesk’s Technology Center in San Francisco to be sent to DC for Adam Savage’s build. The hatch’s components are being fabricated using various mediums and techniques by 44 artists and fabrication shops. These components will come together during a live build at the National Air and Space Museum in DC on July 18th.

Watch how we created a stunning 3D model of the Apollo 11 module.

This hatch was constructed based on a 3D scan project that Autodesk conducted with the Smithsonian Digitization Office. This highly accurate and detailed scan of the command module, officially named “Columbia”, was created using several advanced technologies such as photogrammetry, LiDAR, and five different types of structured light technology.

Incredibly, some graffiti by astronauts was discovered during the detailed scanning project. It’s amazing how we can capture a “digital twin” of the module’s 1960s-era technology by using the very latest in reality capture hardware and software algorithms, which allow us to process the massive amounts of data captured. The high resolution of the scan even lets you see the smallest details, like the text on the control button dials and the way the surface was weathered during its flight to take humans to the first landing on the moon.

Using these scans, engineering student Andrew Barth was able to reverse-engineer a CAD model of the hatch’s intricate mechanics by using Autodesk Fusion 360, which is free for students. By importing the scan model for the hatch, he was able to directly measure features and components in order to create accurately-sized parts. For more complex parts, such as the gearbox mechanism that allows astronauts to open and close the hatch, he referred to copies of the technical drawings created by North American Aviation in the late 1960s.

“The Apollo 11 command module is nothing short of a landmark of human history,” said Adam Metallo, a 3D digitization specialist at the Smithsonian Institution. The Columbia will be the centerpiece of a new state-of-the-art moon-landing exhibition opening in 2020 at the Smithsonian National Air and Space Museum. “This scan will offer people the ability to go inside it and experience it on a deeper level.”

Astronauts Neil Armstrong, Buzz Aldrin and Michael Collin made this command module for their historic moon landing. Now you can explore this historic object digitally as well as download the 3D geometry to study or 3D print your own miniature command module.

Want to build your own hatch? View the model, then download the Fusion 360 files used by the Project Egress team.

Autodesk started working with the Smithsonian back in 2012 as it was starting to plan and capture its entire collection–154 million objects–in digital form. At any given time, only a very small fraction of these objects are on display.Not everyone can travel to the museums, but capturing the entire collection will allow anyone with internet access to study and marvel at the collection,  which includes many historical objects and even living animals from the National Zoo. Autodesk developed the Smithsonian x3D Explorer initially using the is an interactive 3D educational tool accessible to anyone via the web.