Skystone relies on Autodesk products throughout the building process of the world’s tallest modular hotel, soon to be erected in Manhattan.

Skystone is reinventing how buildings are constructed. Skystone is offering cost efficient, higher quality to developers in a compressed timeline with the added benefits of less waste, noise and congestion-causing shipments and staging of materials versus traditionally constructed projects. Skystone is manufacturing fully completed modular hotel rooms including all finishes, furniture and equipment, in a manufacturing facility in Poland, and shipping them to New York City on a single vessel.

Steel modules are created the controlled environment of a factory, resulting in greater efficiency.

The tech behind the record

At Autodesk University 2019, Skystone shared its not-so-secret recipe for success in going for “tallest” this time: Autodesk solutions for end-to-end project delivery. From AutoCAD and Revit for design to Assemble for preconstruction, and BIM 360 for construction management, Autodesk is proud to be part of the DNA of the soon-to-be tallest volumetric modular hotel in the world, and future Skystone projects worldwide. 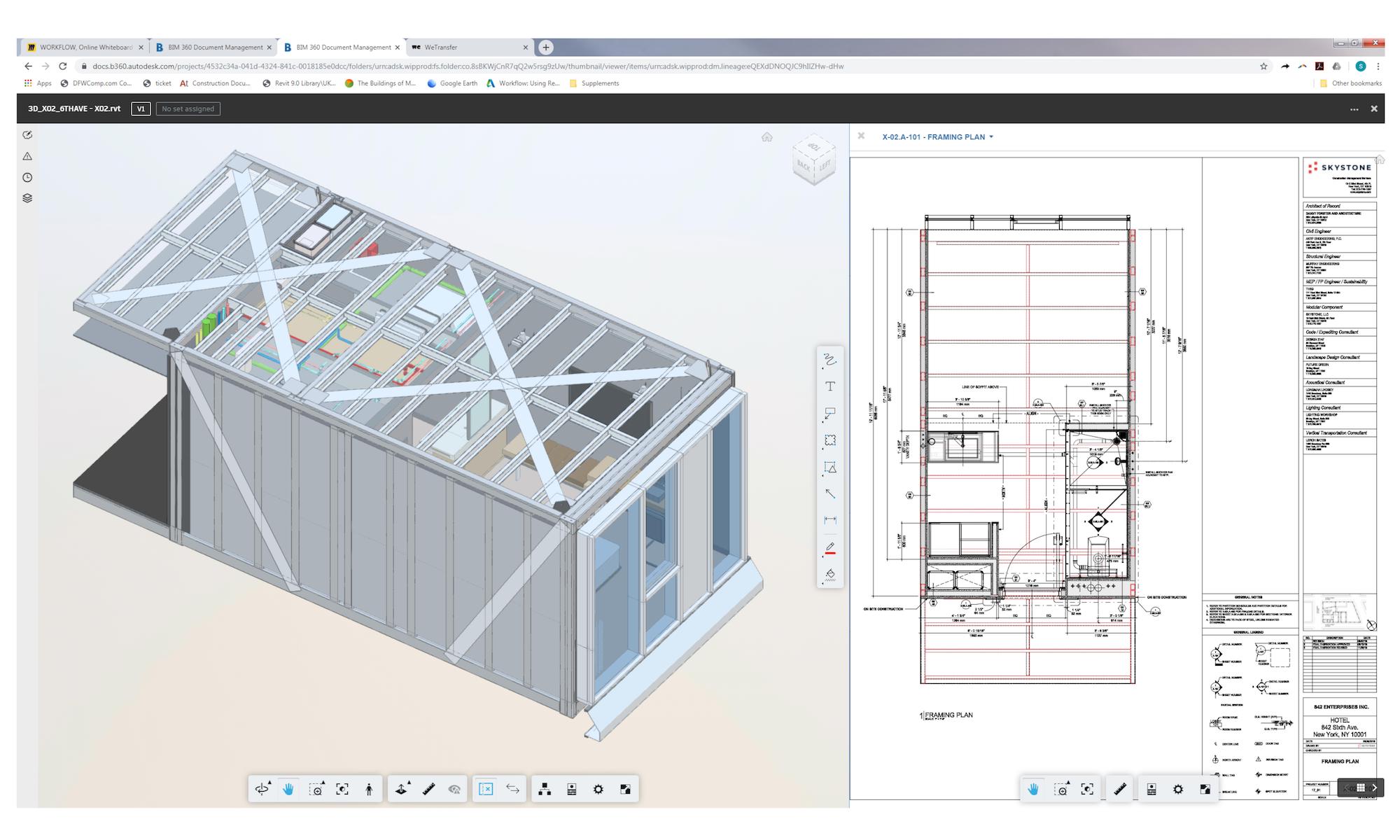 Autodesk’s BIM 360 platform is used for construction management of the AC Marriott and keeps project data and teams connected.

Skystone sought a fully-connected platform to keep all its project data – and there’s a lot of it – and its teams connected throughout the project from design conception through completion. Skystone turned to Autodesk’s BIM 360 platform. While Skystone wasn’t always using Autodesk construction software, the company ultimately saw the benefits of using a single platform rather than its old software tools, which offered limited, single–point solutions for each part of the project.

How do we feel about being the tech partner behind Skystone’s project? Pretty darned proud.

They arrive and they rise 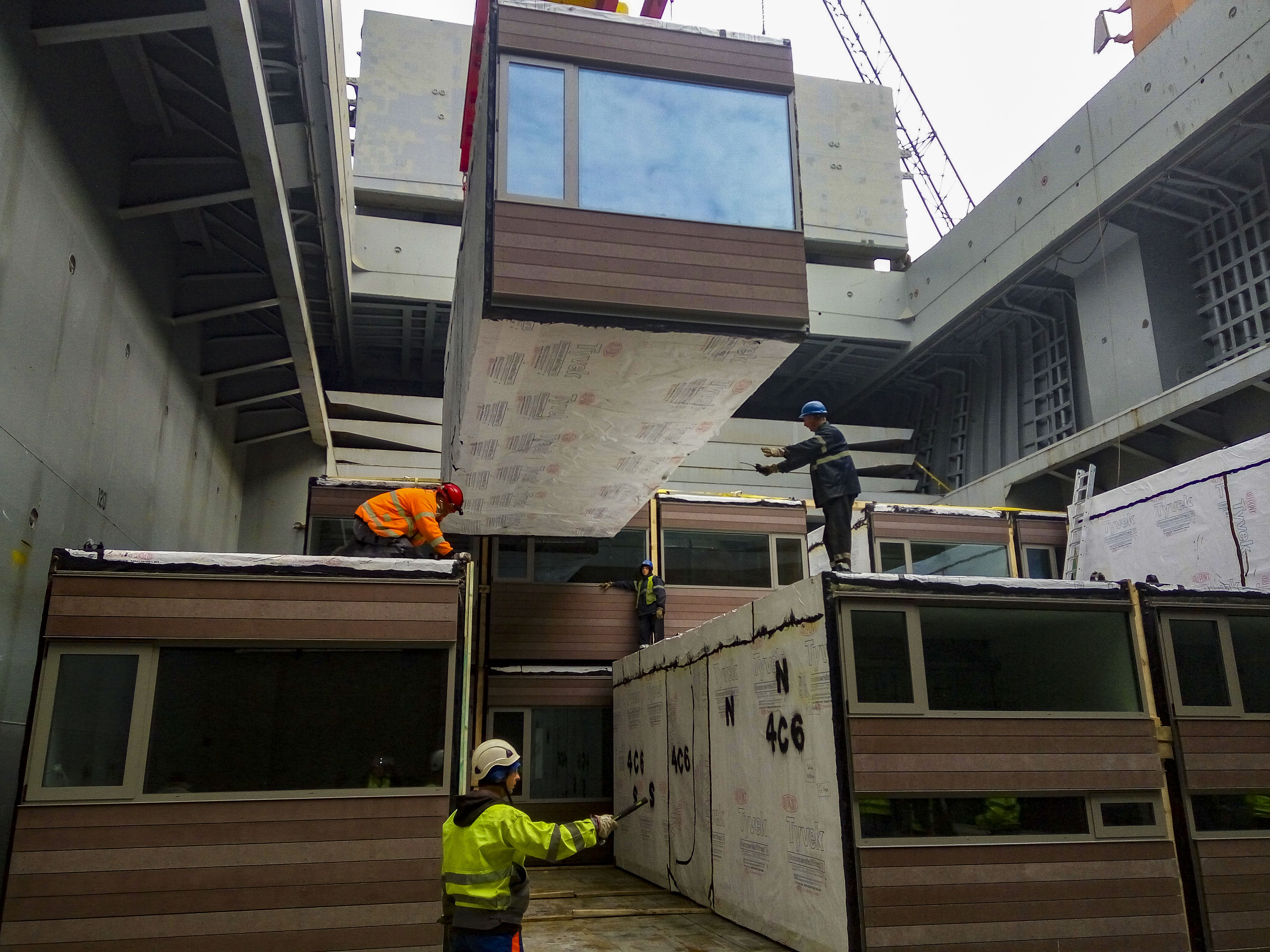 Once the modular rooms arrive in New York, they’ll be loaded onto flatbed trucks, hauled across the Brooklyn Bridge in one impressive spectacle you might otherwise expect from a Barnum & Bailey’s Circus caravan, and lifted into place by crane, one by one. Just imagine how the builders of the Brooklyn Bridge back in 1883 would react to the cavalcade of modular rooms crossing the bridge.

Are there real benefits to modular construction?  Learn more.

What are the benefits of modular construction? A modular approach makes a construction process more like a manufacturing one, taking some of the work away from the unpredictable environment of a construction site and making it more predictable, like a well-run factory. This means fewer delays due to weather, less foot traffic at the job site and less risk of injuries. It also means higher quality and quicker delivery for developers.

Putting heads in beds as quickly as possible

The idea of modular isn’t new. In fact, Sears, Roebuck, and Company sold modular homes more than 100 years ago, from 1908 to 1940. But times have changed, and the construction industry is quickly evolving from modular homes and traditional analog methods to commercial towers and digital processes. Rather than building outside in inclement weather – heat, snow, rain, wind – building is now taking place indoors, which improves safety, quality and predictability. This approach, which we liken to traditional manufacturing processes, is called industrialized construction. 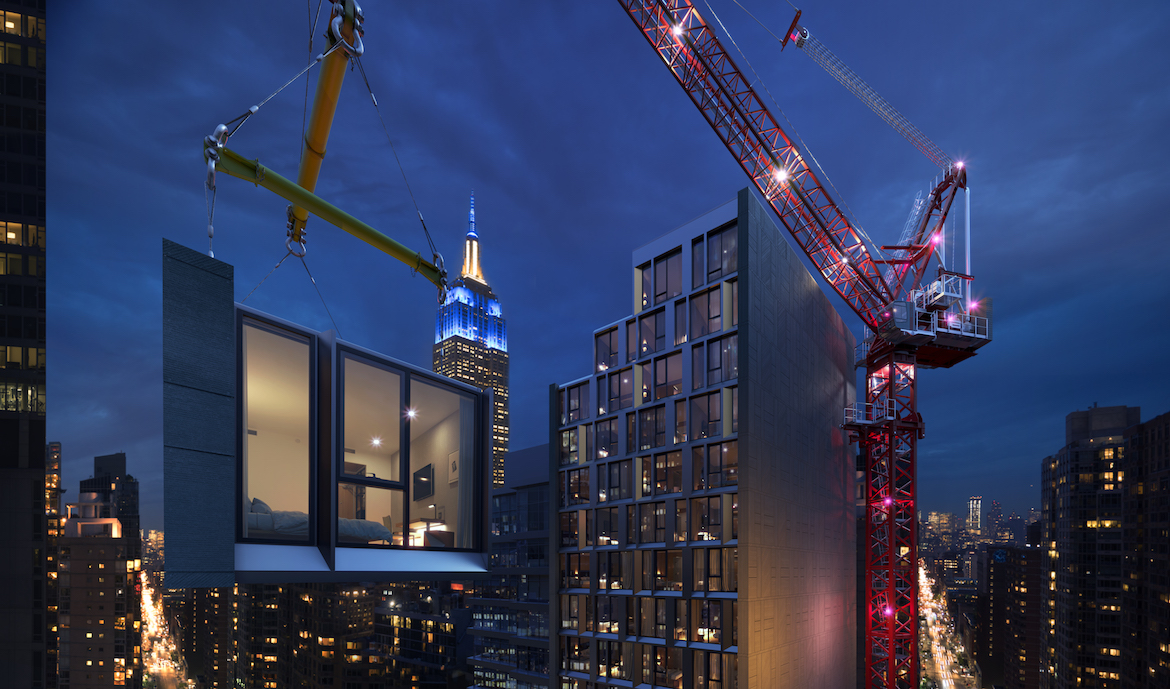 A fully completed volumetric modular hotel room gets hoisted up by crane and stacked onto the building one by one.

As the global population increases and cities become even more crowded than they are today, we need to build things faster. The convergence of manufacturing and construction is redefining the future of making, changing the way the industry builds. In Skystone’s modular approach, buildings are built better and nearly 25 percent faster, and workers are able to work more efficiently in a controlled environment on the front end, rather than work harder on the back end.

However, it’s the hotel developers and franchisees and the brands they work with to flag their properties – such as Marriott International – that are encouraging a movement toward modular. According to a Marriott International executive, modular makes sense because it helps to deliver a high-quality product with less on-site waste and a better guest experience, due to more robust soundproofing.

With that in mind, Marriott International set an ambitious goal of taking a modular approach to construction for 25 percent of its select-service-hotel pipeline in North America. Marriott International is a catalyst and champion for educating the hotel development and franchise world about the benefits of modular and is even providing financial incentives for eligible modular projects.

When the parade of disassembled hotel rooms traverses the Brooklyn Bridge, we’ll be there physically, gazing in marvel, and also be present in the digital DNA of each component.

We look forward to tracking Skystone’s progress and helping them build the world around us – one modular room at a time.